One of our favourite times of the year – English Asparagus season

Traditionally the English Asparagus season kicks off on St George’s Day – 23rd April – but the warm spring weather has meant that the short season has got off to an early start. Good job too because I think we were all in need of cheering up (& yes new veg really does cheer us up here at Clements Premier Produce!).

The English asparagus season is tantalisingly short, 8 weeks to be precise, but the quality is usually excellent. White asparagus is popular in much of Europe & is produced by keeping the growing shoots hidden from light under soil. The less tender, but more fully flavoured green variety is most popular in England. Stalks should be firm with good colour & closed tips. Smaller, thinner stalks are not necessarily more tender; in fact thicker specimens are often better due to the smaller ratio of skin to volume. 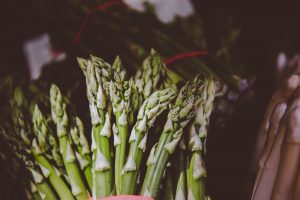 The earliest records of asparagus cultivation trace it back to Greece some 2,500 years ago. The Greeks believed that asparagus possessed medicinal properties & recommended it as a cure for toothache (still worth a try maybe?). It was highly prized by the Romans who grew it in high-walled courtyards & we know that asparagus has been grown in England since the sixteenth century.

Growing asparagus is definitely a labour of love. Each spear is harvested by hand when it reaches just the right height & when the weather is right asparagus can grow up to 10cm in just one day! Most people have never seen the plant in full display…

Without the ferns the plant would be unable to photosynthesise & store enough energy to produce the delicious stems the following year. This, in a nutshell is why the asparagus season is so short. Growers need to stop cutting the spears in early summer to allow the plants time to recharge. It takes an average of three years for each plant to build up the energy reserves needed to produce its first crop –  as a grower you’ve definitely got to be in it for the long haul! 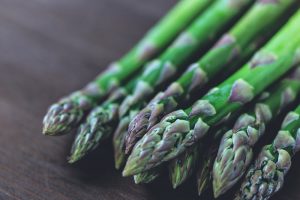 Traditionally matched with hollandaise sauce, asparagus picked just a day or so ago (just like the produce we supply here at Clements Wholesale Fruit & Veg) requires minimal messing with. Enjoy it with a drizzle of olive oil, a twist of black pepper & perhaps a few shavings of Parmesan cheese – delicious!

See you later in the month for more seasonal highlights. Do get in touch with any questions or requests, we always love to hear from our customers.